According to Tim Garvey who heads the department of nutrition sciences at the University of Alabama, U.S.: “A negative-calorie food would by definition consume more calories, for the body to handle it and process it, than is contained in the nutrient content in the food.” 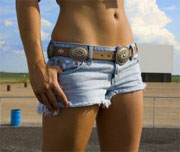 It’s the dieter’s dream: food so low in energy that chewing it burns calories. If you’ve been known to sit at your desk munching carrot sticks in the hope of giving your digestive system a workout, you might be disappointed to learn that experts don’t think ‘negative calorie’ foods really exist.

While this is theoretically possible, he says, there are currently no foods that do this.

But what about celery, I hear you ask? Considering that celery mostly consists of water and fibre, surely it contains fewer calories than the body expends breaking down all those stringy bits? Dr Garvey says that while there are only 10 calories in a large stick of celery, it only takes about two calories for the body to process it.

While celery offers little in the way of sustenance, recipes for celery-based snacks are popular amongst people trying to cut down on ‘bad snacks’ like crisps and chocolate. One popular snack is a stick of celery smothered in either cream cheese or peanut butter. While this is great for a quick protein boost, both of these spreads are high in fat and, if eaten too often, may ruin some weight loss efforts.

However, munching away on a celery stick by itself is a great way to distract the mind from a craving. It is also high in fibre and fills the stomach to create a feeling of fullness. While it won’t help your body burn calories, it may stop you from consuming more calories later.

Ron Mendel, who has done research into foods that speed up the metabolism says that while some ingredients (including coffee, guanine, taurine and green tea) may have some minute effect on the amount of calories burned, they are not significant in the long run.

Dr Garvey believes that the only real way to lose weight is to eat less and exercise more. Eating the odd stick of celery isn’t going to make up for the chocolate biscuit you sneak in at tea time, or the gym session you skip after work.

To find out how a nutritionist could help you lose weight, please visit our Weight Management page.