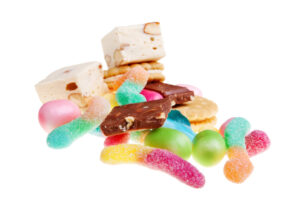 There’s no doubt that the dieting industry has traditionally been geared towards women.

Society says men must be stoic, strong and hardy. They must eat bacon and steak and drink copious amounts of beer. A real man wouldn’t be seen dead with a can of diet coke, or a Weight Watcher’s yoghurt.

Over-eating and lack of exercise is a big health concern in the UK and experts predict that by 2050, 60% of women and half of all men will be clinically obese.

Despite these health warnings, a large proportion of men are still reluctant to go on a diet. According to a new survey by home delivery company Diet Chef, 14% of men think dieting is something only women should do.

Despite the common misconception that it’s mostly women who struggle to fight the temptation of sweet treats, over a third of the men questioned said they struggled to control their weight because they loved eating chocolate. 28% said the culprit was biscuits dipped in tea, 18% said they’d been drinking too much beer, 25% said it was down to irresistible pies, and 33% blamed regular takeaways for the extra inches.

Kevin Dorren, Founder & Head Chef at Diet Chef UK, said: “In modern society men are also very concerned about their appearance. We have had a steady increase in the number of men who sign up to Diet Chef as it helps them bring a pattern of healthy eating and portion control into their lives.”

Getting plenty of exercise and eating a balanced diet is the key to weight loss. To find out how a nutritionist could help you improve your body, confidence and health, please visit our Weight Management page.