Benefits of the Sardinian artichoke

I would like to dedicate this article to the Sardinian artichoke DOP (Protected Designation of Origin). This is my favourite vegetable, so much so that I have chosen it as the logo for my business. 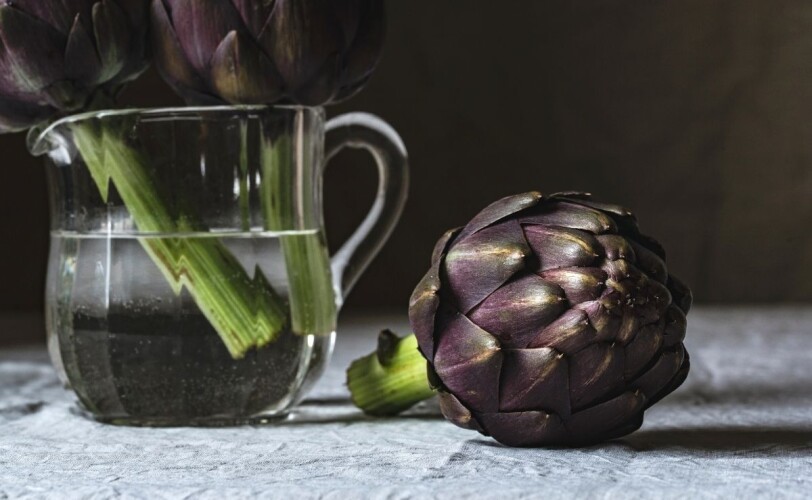 The spiky Sardinian artichoke or carciofo spinoso sardo (not to be confused with the Jerusalem artichoke - a knobbly tuber which couldn’t be more different in its growth - but delicious nonetheless) looks distinctly different from other varieties; its conical, elongated head bears the most vibrant of yellow-red spines on both their bracts and leaves but, the most obvious difference is the dark coloured leaves and thorns.

This species is particularly sought after for its softness and sweeter taste, this is thanks to the island’s mild climate, indeed cold conditions are detrimental for this beautiful vegetable. Though it is widely used, I wonder if anyone has made the connection between the artichoke and the thistle? The plant is the cardoon, cynara cardunculus, also called the artichoke thistle, which is a member of the sunflower family. It is a naturally occurring species that also has many cultivated forms, including the globe artichoke.

The cardoon is harvested from November to February and then re-sowed in early spring. The artichoke comes from the cardoon’s plant and when harvesting the cardoon, two or three plants are left so the artichoke can grow. The leaves can be eaten raw or cooked - similar to the artichoke i.e. raw with olive oil, fresh lemon and salt and pepper or in salads, pasta, risottos and soups.

Where is it cultivated?

The Sardinian artichoke (carciofo spinoso) grows easily in dry conditions and light soils and it spreads intensively throughout the island, although the main areas for production and export are Samassi, Villasor and Assemini.

The artichoke was first discovered in Rome, and purchased by wholesale merchants.

The artichoke was named al-kharsuf in Arabic, from which comes the name carciofo in Italian, alcachofa in Spanish, and artichoke in English. But, it was the Italians who developed the varieties of global artichokes with different flavours that became famous all over Europe. In the early 17th century, it was grown and appreciated in England, but the English fell out of love with it for a while towards the end of the 1900s.

Eventually, perhaps with increased travel, the British rediscovered the taste for the artichoke’s well-guarded heart. The artichoke is considered one of the finest vegetables we can grow. Sadly, the artichoke is not seen as a commercial crop in the UK, unlike the Jerusalem artichoke which is produced in great volumes. I have to say that I am puzzled by this!

Health properties of the Sardinian artichoke

Not only has the Sardinian artichoke many health properties because of its active ingredients, but also contains:

It is also a good prebiotic; extremely good for a healthy gut.

The cynarine active ingredient is very important because it decreases cholesterol levels and it is also used in a very famous Italian liqueur which is normally drunk as a digestivo – good digestion. In Sardinia, anyone who follows a precise diet and healthy nutrition and who wants to prevent cardiovascular diseases, resorts to the artichoke.

It really is the perfect medicine.

I don’t care who you are, if you taste the spiky artichoke from Sardinia you will fall in love with it, even if it does take some getting used to and determination to get into it! Their nutty, buttery flavour is the prize for negotiating those ferocious thorns. I remember as a child the face that our guests used to pull when we sat at the table and there was an artichoke next to every plate, they were thinking, "What are we going to do with that?” But by the time the holiday was over they would have learned how to clean it and eat it, and they would take some back home with them.

The Sardinian artichoke is so tender that even the stem can be eaten and my goodness it is delicious! Because the choke is rich in iron (among other things) when we finish eating it, our mouths and teeth are dark green/black, the colour of the iron, nothing that a bit of bicarbonate of soda on our toothbrush couldn’t resolve. I am having the most wonderful childhood memory as I write.

In spring we would go out for the afternoon to the countryside with our cousins and friends to pick various goodies, one of which was the wild artichoke. This is a much smaller variety but the taste is fabulous and of course, packed with the same medicinal properties. Imagine vast areas full of wild artichokes, many of them in the same plant, we would come back full of scratches, but it was so worth it. 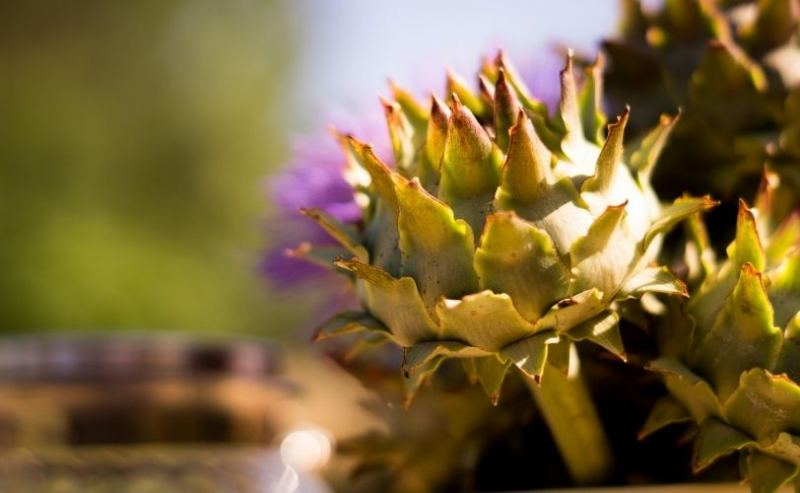 When the artichoke is young, the most popular way to eat it is with olive oil, fresh lemon and salt and pepper in a small dish - we used to share one in the centre of the table. We would start by peeling the stem and simply dipping it into the oil and lemon mix, then discard the first few outer leaves and would start eating the tip of every leaf by simply dipping again in the oil and lemon mix.

Once we arrived at the heart we would halve it or quarter it with a knife, remove the furry bit and dip that in the mix too. The artichokes were accompanied by fantastic civraxiu e casu that is Sardinian for bread and cheese. Our bread is made with Cappelli grain, but I guess that is another article!

There are many recipes from pasta to risotto dishes and meat dishes, they go particularly well with lamb. When preparing the artichokes put them in acidulated water (a dish of water and lemon) to prevent them from going dark then you can then put in the fridge until you are ready to cook. Also, you might want to use gloves to prevent your hands from going black - I do.

Prepare the artichoke as above, slice the heart so that you have round slices.

In a glass bowl, beat the egg (organic), add the sliced artichokes (the artichokes can stay in the egg mixture in the fridge until you are ready to fry them) and fry in olive oil, sprinkle with salt and pepper. It makes a great starter or a light lunch. Yum!

Clean the artichokes as usual, removing the external leaves and the thorns without damaging the leaves, also remove the internal beard. Cut into quarters and place in a glass bowl with lemon water (as explained above).

In a pot, fry the onions gently until golden, add the artichokes, add a ladle of warm water and cook for 30 minutes. Pour the sauce that has formed at the bottom of the pan on the artichokes when you serve. This is another starter or light lunch as well as a delicious side dish to chicken or lamb. 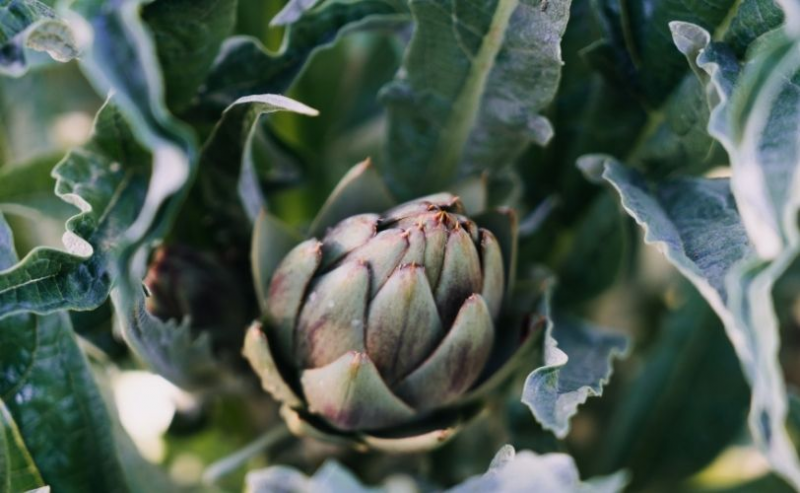 Clean the artichokes as usual. Remove outer leaves, remove the inside beards and cut the top of the heart to make it sit flat in the pan and cut the leaves so it looks like a glass.

Finely chop enough parsley and garlic and stuff the artichokes, add some olive oil inside every artichoke and place at the bottom of the pan. Sprinkle the salt and pepper over and cook until tender. Another light dish or a starter, a side dish or simply enjoy with delicious bread.

Both artichokes and cardoons can be preserved in oil. They are absolutely delicious.

Please don’t forget that you can use the artichoke as a base for pasta or risotto dishes.

Working with your nutritionist

Speak to your nutritionist and make sure you are clear on the importance of prebiotics and your gut health - I am certainly in tune with it. Sometimes, small tweaks here and there can make a big difference and we don’t need to look very far for it. Please remember, that when I talk about food or any ingredients, everything is organic. I think life is really too short to eat food that contains pesticides.

I hope you will give the artichoke a try; be adventurous with your cooking and try something new every week at least. Feel free to contact me if you have any questions. I hope you enjoy this article, I certainly went back in time with lovely childhood memories. I can see my mum preparing the artichokes, she was a genius in the kitchen. I miss you mum.

Hello, my name is Milvia and I am an FNTP Accredited Nutritional Therapist who helps individuals to live naturally longer and healthier lives. With professional nutritional support, I have helped my clients with various challenges including but not limited to: weight management, digestion and bowel...